I’ve got one complaint to get out of the way, and then I promise that the rest of this post will be kinder/gentler/sweeter. Probably somewhat mushy, but hopefully not altogether sappy. That’s the goal.

But first, the complaint: Between the morning sickness and a cold my three-year-old brought home last week, I’m feeling pretty awful at the moment. I keep telling myself that I shouldn’t be feeling so bad: “Buck up, Julie! You’ve got things to do, boys to care for! You’re almost done the first trimester anyway! Your hormones can’t be making you that sick anymore! And it’s just a silly cold! Get with it!” So I go forth and try to seize the day or something, and then I come home and collapse and I’m no good to anyone for 24 hours. Repeat.

Tuesday it was a board meeting/reception with the boys in tow. Thursday it was volunteering at my son’s preschool. Both times, I deluded myself into thinking it would be no big deal. Both times, I arrived back home overwhelmed, exhausted to the point of numbness, and pretty much unable to move.

The morning sickness would be bad enough, but this stupid cold/infection/whatever is pushing me over the edge: sneezing, blowing the heck out of my nose, sore throat, head congestion, and now this stabbing/burning/shocking pain all over the right side of my head. Woe is me.

Last week was a good week for the blog: Even through the morning sickness I was able to write four posts, that people liked. And people I don’t even know were stopping by to read my stuff. I should have capitalized on my temporary surge in numbers by writing several meaty posts this week. But given the fiery, electrical knives that were attacking the side of my head, the best I could muster most days was to lie on the sofa and plead with the boys to not wrestle on top of me. I’ll say it again: Woe is me.

Okay, I’m done now. I have enough perspective to know that (a) all of the above is temporary, (b) I could be feeling significantly better as soon as next week (I’m almost at 12 weeks! Woo-hoo!), and (c) my life is full of good things. The best things, like love and family and God’s blessings and security and friendship and hope and grubby little boy faces.

I think I might have had three days this week without any nausea – the first in over a month. So there’s a light at the end of the tunnel! I’m hoping that I’ll fully turn the corner next week. Not only am I just plain ol’ ready to be done with it, but I have a few serious blog posts in my head that I’m itching to get started on. I also want to tackle (i.e. carefully read) the America piece on Pope Francis that everyone’s talking about. Maybe nausea/fatigue/burning head aren’t the best reasons to not have read it yet, but I have a feeling that I’ll need to have some clarity of mind in order to take it on. So c’mon, good health and decent energy levels! I know you’re out there! Come to Mama!

As you see in this post’s title, I’m kind of cheating this week. I’d started writing my {pretty, happy, funny, real} Wednesday evening, but quickly found that I just couldn’t do it anymore: sleep beckoned. And it beckoned again Thursday afternoon, when I’d hoped to have time to finish the post.

And then Thursday evening, when I began thinking about what I’d write for my 7 Quick Takes, I kept coming back to contentment. As in,
{phfr} contentment. (Okay, okay: contentment and that one complaint in #1.) That evening as I watched my little boys play so well together on the playground, I mulled all the little signs lately of how deeply they love each other. Yes, they fight and wrestle and get angry, but they also seem to be each other’s greatest delight. 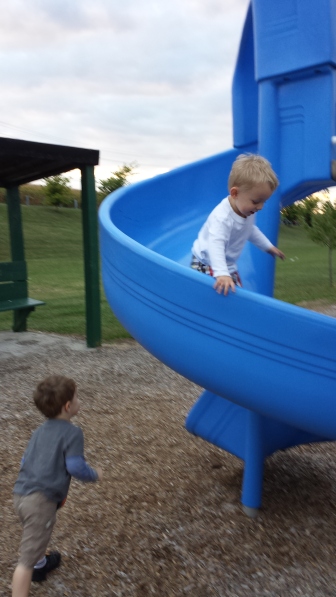 Witnessing my boys’ growing love for each other just wows me. I never imagined what a joy it could be. Talk about contentment.

So, enter {pretty, happy, funny, real} for Quick Takes 4 through 7:

The boys and I were in Annapolis Tuesday evening for the aforementioned meeting and reception. We don’t get there too frequently these days, given what a hike it is for us, but each time we’re there, I’m struck with how pretty that place is. And how blessed we are to get to spend any time there at all. 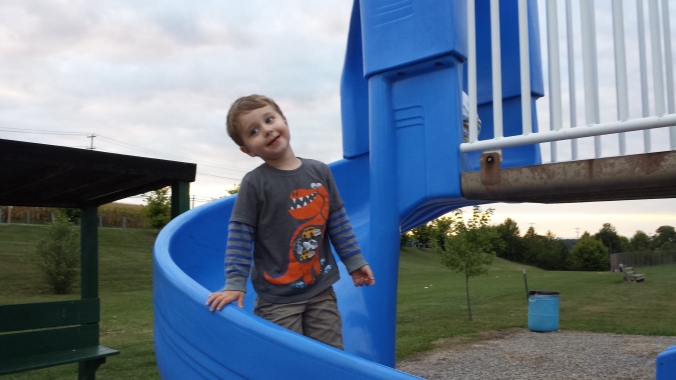 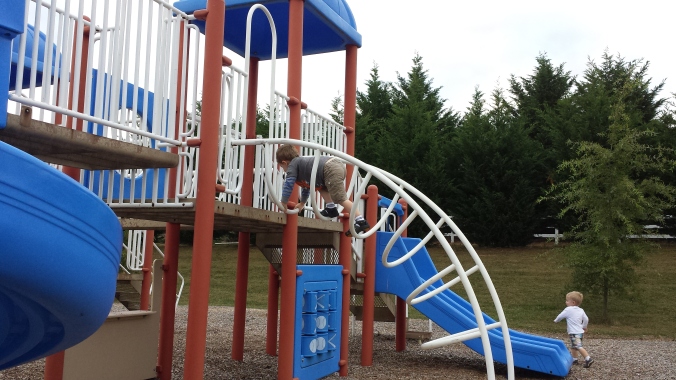 I’m not sure that 2- and 3-year-olds are capable of experiencing elsewhere the unadulterated happiness they find on a playground.

We spent our time in Annapolis this week at the Charles Carroll House and Gardens, the Annapolis home of Charles Carroll of Carrollton, the only Catholic signer of the Declaration of Independence. Fittingly, the boys were gifted with a pair of tricorn hats and Revolutionary boy dolls. They were so funny running around with their hats and dolls. Of course they’re too little to have any concept of American history and what those gifts represented. Rather, by their cries of “Aargh!” as they ran around, I realized the boys thought those hats made them pirates.

I have this dream of being a farmer, or at least a major gardener. But I (big time!) lack the knowledge base to get me there, and at this point in my life (that is, a chaser of small boys every time I’m outside), I don’t have much time to practice the little I do know. But I figured I could handle some tomato plants this summer, so I sweet-talked my hubby into planting six different and interesting varieties for me.

I did a decent job of tending them at first and I was overjoyed when they bore their first fruits. But then I was struck with a powerful, pregnancy-induced aversion to the things. I can hardly stand to look at the little beauties right now. Goodbye, dreams of tomatoes with fresh basil, fried tomatoes, BLT’s! Hello (because of both the aversion and the morning sickness), neglect and waste.

Which is why I now have a garden full of overgrown, collapsed tomato plants, full of fruit that will mostly go uneaten. (My husband has no great love for tomatoes and most of our local friends/family seem to have their own gardens.) Ah, well… maybe next year. 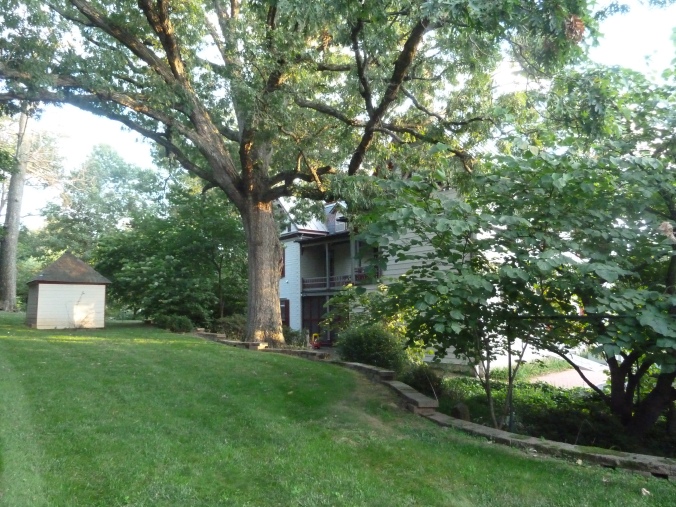 Have a great weekend, all! Please be sure to stop by Conversion Diary’s 7 Quick Takes Friday and Like Mother, Like Daughter’s {pretty, happy, funny, real} to see how everybody else is wrapping up their week!