I was less than a mile from the Pentagon on the morning of September 11, 2001. I was sitting at my desk in a block of office buildings chock full of military and civilian federal workers. My colleagues across the office felt the boom of the airplane’s impact; we all smelled the smoke. I’ve written about it before.

Later that day, and in the days immediately following the attack, the thing that most struck me was that wherever you went, people were thinking about the same thing. Going down the elevator, walking through the halls, sitting on the Metro, driving the back roads toward home – you knew that everyone around you was thinking about the attack and wondering whether it was over.

That’s how I feel now. I’m struck by the fact that pretty much everyone you encounter – in person, on the phone, online – is thinking about the coronavirus pandemic and its extraordinary impact on our everyday lives. And we all know that it’s just begun.

Like last time, it’s the weight of that shared experience that gets me. Events have got to be super, crazy bad to dominate everybody’s attention at once.

I may be a worrier, but I don’t usually struggle much with anxiety. I have a tendency to think things will turn out well in the end. Maybe I’m an optimistic worrier.

But this thing? It feels heavy. And though I know we’ll someday get past it, I also know there will be plenty of people for whom it will not end well. Who will get sick? Who will we lose? Which businesses won’t reopen? Whose job won’t come back?

This morning, like much of this week, I was a little aimless in my gloom. I was distracted and the kids were fighting. One was screaming her pretty little head off. She was being left out. (But she was also being a pill, and it was hard to see which came first – the being left out or the being a pill.)

I couldn’t muster any words to comfort her. But it did occur to me that a change of scenery might do her some good. So I whispered for her to put on her rain boots and sneak outside with me. “Shh! Don’t tell anyone. Let’s go find some flowers to cut.” It was drizzling; she grabbed her umbrella.

A few steps out the house and my girl’s entire demeanor changed. She quieted. She smiled. She put up that umbrella and walked slowly and looked around in wonder. We found some flowers; she twirled her pink, polka-dotted umbrella.

And soon enough, her siblings caught on. One by one, children appeared outside with umbrellas in-hand. Soon they were marching around the yard together, a funny little springtime parade.

I pulled a chair out of the garage and sat there for a while, staring at them. How wonderful that even when all the adults everywhere are thinking about the same horrible thing, children can still be caught up in raindrops and umbrellas. 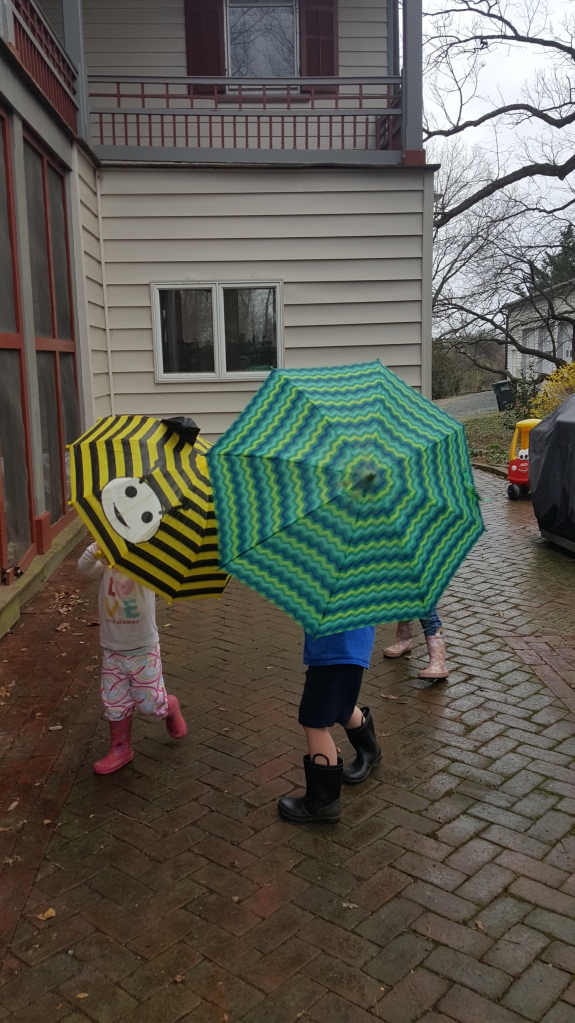 (That rainy-morning romp was one highlight of today. Another was our shared viewing of daily Mass. This time everybody seemed to want to be close; five or six of us clustered together on the sofa for most of it. I’m really pleased, so far, with how the kids are reacting to this new practice. Besides Mass, the kids watched the daily program from the Cincinnati Zoo. They drew, they wrote, and the two bigs did a little homework. I need to get better about doing schoolwork with the Kindergartner – and next week I think I’ll need to be a little more diligent about homework, generally. It would be good for us on a number of levels.)