One day this summer, my boys rediscovered the sprinkler in their grandma’s garden. I walked into the backyard to find them sopping wet, grinning from ear to ear. Even over their whooping and hollering, I could hear water sloshing in their rain boots.

It was a beautiful afternoon, unseasonably cool for the end of July, so I sat down on a nearby lawn chair and plopped the baby onto my lap. Together we watched his older brothers race back and forth through the spray. 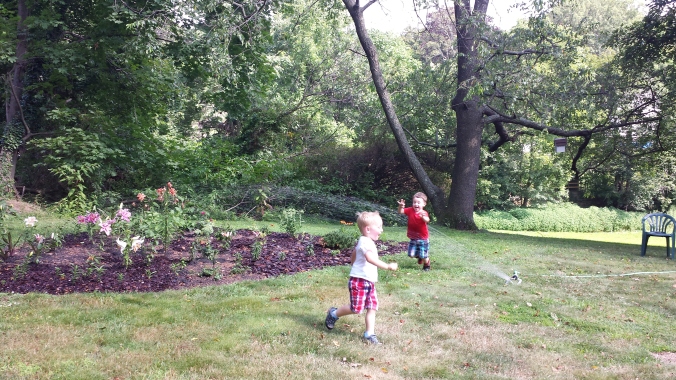 The whole scene was just about a cliché of summer: the grass and trees were a beautiful, lush green; the children played happily under the warm late-day sun; the water droplets glowed gold as they fell through the air. At one point I laid the baby down so I could pull boots and soaking-wet socks off his brothers’ feet. The baby lay there in the grass and stared up at the leaves and the sky. It was positively idyllic.

An hour later we were back inside the house with the television turned to the evening news. The program opened with a report on the fighting in Gaza: footage of destroyed buildings, mostly. My four-year-old, who normally begs me to change the channel on the rare occasions that I turn on televised news, was captivated. He wanted to understand what was going on.

I tried to explain, as gently as possible, about fighting in another part of the world, which breaks buildings and hurts people. But soon enough footage of crying, injured children popped onto the screen and I scrambled to the remote to change the channel as quickly as I could. I didn’t want those images stuck in my boys’ minds.

My boys are still small – just four and almost-three – so they understand little of how the world is organized, let alone its potential for conflict. We’ve taught them their town and they know the name of our state, even if they don’t understand what a state is. They recognize the American flag, but probably wouldn’t be able to tell you what country we live in. In fact, they’d probably say something like, “Merican Fwag!”

They know we’re Catholic, though that probably doesn’t mean much more to them than that we attend church on Sundays, where we have to be really quiet because we’re there to pray to God and thank him for the good things in our lives. They have no inkling that many worship God in other ways, that others don’t worship Him at all, and that some people use God as an excuse to hurt one another.

We’ve talked about death. Indeed, the concept has so intrigued my four-year-old that he routinely asks, “If I do diss, could I die?” (Doing “diss” can apply to any number of daring/stupid things, such as jumping off the third-floor landing.) If you mention Jesus to him, the first (and probably only) thing he’ll say about Him is, “Jesus died on da sign of da cwoss!”

I want to raise my children to do all of these things.

I want my children to pay attention to the news, to think critically about the information they’re given, to care about those who hurt, to pray and act towards just resolutions.

But right now they’re little, and at least one of them is very sensitive to all things scary. (Seriously, he has on more than one occasion been brought to tears because “Dat bad man!” stole Elmo’s blankie in a silly little Sesame Street movie.) Right now their nightmares center on monsters and shadows and “sary wobots.” I’d like to keep it that way as long as possible.

So how do I begin to break it to them that so many people around the world don’t enjoy the comfort and security we do? How do I make others’ experiences seem relevant to our lives? How do I inform them without scaring them?

I don’t really know. So far, they listen to NPR with me, though I’m sure they don’t pay attention to or understand most of what they hear. When they ask questions, I answer them. And on the rare occasions that I notice relevant, teachable moments in the daily experiences of preschoolers, I try to take advantage of them. Maybe I’ll try to watch televised news with them more often, but only if I’m prepared to make that scramble for the remote.

More experienced parents (and more thoughtful people, parents and non-parents alike), I’d love to hear from you: How much of the world’s suffering do you let into your children’s lives? At what age do you start? How do you inform your children about conflict, war, terrorism, and other scary things without making them feel unsafe? Does there come an age when “feeling safe” is no longer your goal?

I would love to hear from you! Please share your experience/insight/expertise/best guess in the comments. I could use them! Many thanks in advance.

4 thoughts on “Opening That Window To The World”