Yes, I’m more than a little late to the 7 Quick Takes Friday game this week. Right now my free time seems to come in five to fifteen minute spurts. And my two-handed free time comes about once every six hours. (I know, I know… such is life with two preschoolers and a newborn. I know.)

As I mentioned in my {phfr} post the other day, this week I received a certain little book in the mail, one the Catholic blogosphere is all kinds of excited about – “Something Other Than God: How I Passionately Sought Happiness And Accidentally Found It” written by none other than Ms. 7 Quick Takes Friday / Ms. Conversion Diary herself – Jennifer Fulwiler.

Anyone who reads Conversion Diary regularly will know that Jen has put an incredible amount of work into this book (SOTG). And let me tell you, even from just the first few chapters, it shows. I’ve been enjoying Conversion Diary for several years now, so I suppose I’m not the most unbiased reader. But seriously, this book, which tells Jen’s atheist-to-Catholic conversion story (and, um, how she “passionately sought happiness and accidentally found it”) is so well written. It’s captivating – the kind of book you don’t want to put down.

Except that, given the two preschoolers and the newborn, you kind of have to. Which is why it will take me longer to finish this book than any page-turner I’ve ever read before.

Also. Jen’s running all sorts of contests right now to celebrate her book’s launch. A couple of them involve taking pictures of the book – one is for “the most epic selfie” with SOTG, the other is for a picture of it in the weirdest place. I don’t have a chance in either category. I’m way too self-conscious to try for an epic selfie, and I’m sure that other folks have way weirder places to take book pictures than I do. All I can think of is to take pictures of my book on a big pile of laundry, or a counter covered in dishes, or like this: 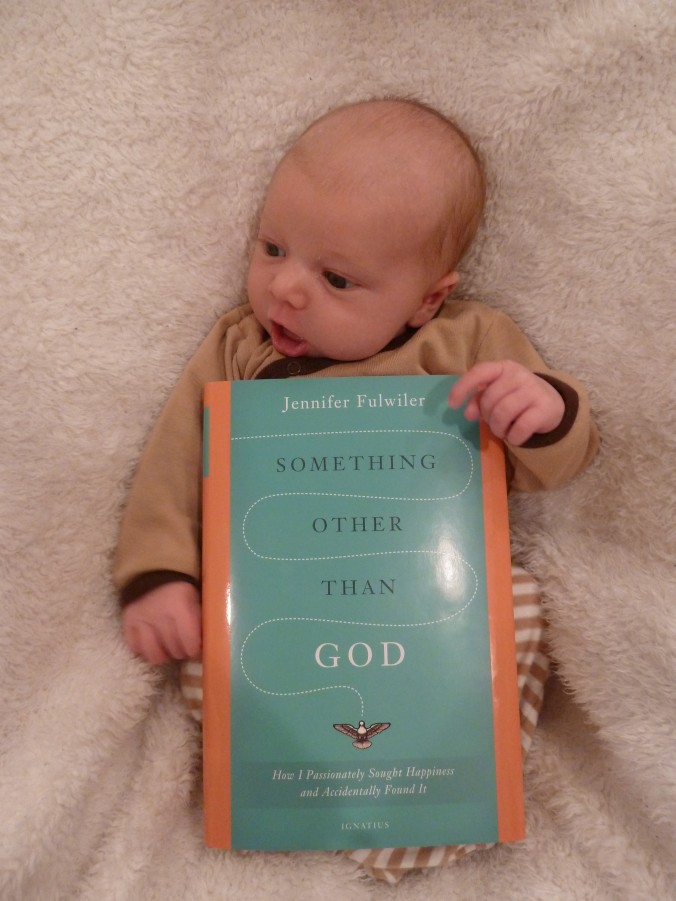 Are you calling me weird?

Speaking of the two preschoolers and the newborn, let me tell you about a triumph I had the other day. At the grocery store. (Anybody who’s not currently a mommy to small children may as well just jump right over this take – I won’t blame you for being uninterested in the minute triumphs of life with littles.)

We were smack dab in the middle of a very busy day, just finishing up at the barber’s shop (both boys taken care of!), and everyone – especially the baby – was getting hungry. But we needed just a few things at the grocery store. So I took a gamble and decided to risk it. We walked straight into the store without stopping to stow the stroller in our van. Which left me with a conundrum: how to get a three-year-old, a two-year-old, a newborn, a stroller, and a load of groceries (too heavy for the stroller) through the store by myself? 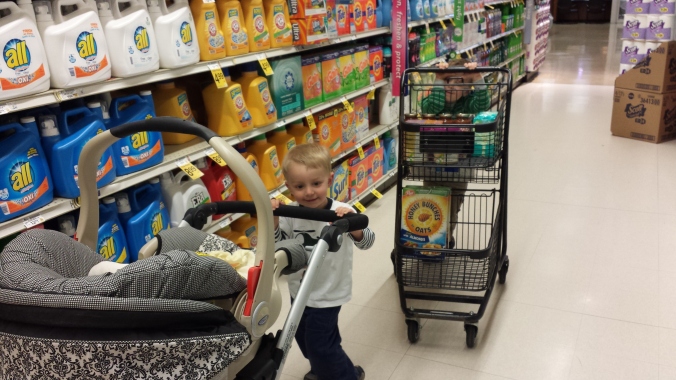 Our little caravan must have made quite the sight, because people kept stopping to stare. “How old are they?” a few of them asked, looking bemused.

But the boys did great! They didn’t crash into anything or run over any toes, or even fight or take items off the shelves. I was quite the proud little mother hen. Especially when we returned to the car and I thanked the boys for being such good helpers. “Anytime, Mommy,” my older son told me. “You just wet me know when you need me.”

After developing something of an aversion to it at the end of my pregnancy (why? I have no idea), I’ve fallen back into my old NPR habit. So you can expect me to resume sprinkling random NPR-gleaned tidbits into my 7 Quick Takes. This week, I’ve got two:

First, for the amazing and courageous amidst the horrible. Last week, Fresh Air aired an interview with Tyler Hicks, a New York Times photographer who was awarded the Pulitzer Prize for his photographs of the 2013 mall attack in Nairobi, Kenya.

I found the interview to be more moving than I expected, especially the story behind the photograph of a mother and her two young children. The image shows them lying quiet and still, on the floor next to a counter covered in cups and saucers.

Of course Hicks had no way of knowing what became of the three. Shortly after he was awarded the Pulitzer, however, the woman made contact with him. She’d seen coverage of the prize and recognized herself amongst the photos.

It turns out that she and her children – a 10-year-old girl and a 2-year-old boy – had spent five hours lying on that floor. Five hours of fear and the most incredible stress. The woman had spent the entire time talking and singing to her children, focused on keeping them calm and still and quiet.

I have a two-year-old boy.

Two-year-old boys are busy. They are not known for their ability to remain still and quiet. I have no idea how I’d get through that situation with him (and another child to boot!). No idea. Just thinking about it makes me sick. What an incredible mother. And what awful, horrific circumstances she found herself in.

This past Monday, the Diane Rehm Show aired a discussion on efforts to grant legal rights – indeed, personhood – to animals. At first I was puzzled to hear that Robert Destro, Catholic University law professor and director of their Interdisciplinary Program in Law and Religion, would be one of those participating in the discussion. Then, ahh, yes – it came to me:

Legal rights – personhood – for animals. Animals that are deemed sufficiently sophisticated on a cognitive level. A personhood that is based on intelligence, on ability, rather than on humanity. What a dangerous thing, to attach personhood to a set of cognitive criteria, to maintain that being a person is somehow distinct from being human.

Yes, this (false) person/human distinction calls to mind the debate on abortion. But it also begs us to consider those who have already been born. Newborns, perhaps even older infants, wouldn’t meet the criteria discussed for personhood. Neither would some people with cognitive disabilities. Do we really want to live in a society that grants legal personhood in such a way that a chimpanzee would qualify, but my four-week old would not?

I’ve never thought of myself as a feminist before, but I might just start doing so. Because Simcha Fisher is right, as usual:

You know one of the things I love about my husband? In the evenings when he’s playing around with our boys, he captures them and holds them tight and when the little one yells, “Wet me det down! I wan det down!” He responds, “Oh, you want to get down? Okay!” and then forces the kid into a little disco dance, complete with music and hand motions.

Oh. My. Goodness. It’s hilarious. Sometimes it can be so entertaining to have small children (and good daddies) around.

It’s also entertaining to have good grandpas around. And my boys have the best:

Happy weekend, everyone! Don’t forget to stop over to Jen’s to check out all the other Quick Takes!