Happy New Year! It’s been forever and I have a long-overdue update for you, and it’s the best kind:

She’s been here for some time, actually – Baby Girl was two months old yesterday! I wasn’t blogging when children numbers one and two were born, but I think it took me one day to blog a birth announcement for my third child and about two weeks to blog child number four’s birth. If we ever have another, I expect I’ll tell you about it around the kid’s first birthday.

Anyway! Here we go: On Tuesday, November 21 Brennan and I welcomed baby #5 and girl #2, our biggest newborn (9 pounds, 9 ounces!), who was delivered after my longest labor (15 hours).

Because I rarely name them on the blog and because I’d like to demonstrate how (I think) Baby Ilsa’s name rounds out the others’ so nicely, here’s a full list of our crew:

In all, we are now Brennan, Julie, Breck, Jude, Isaac, Josie, and Ilsa. B-J-B-J-I-J-I (I am a person who likes lists, and I like that list in particular.) 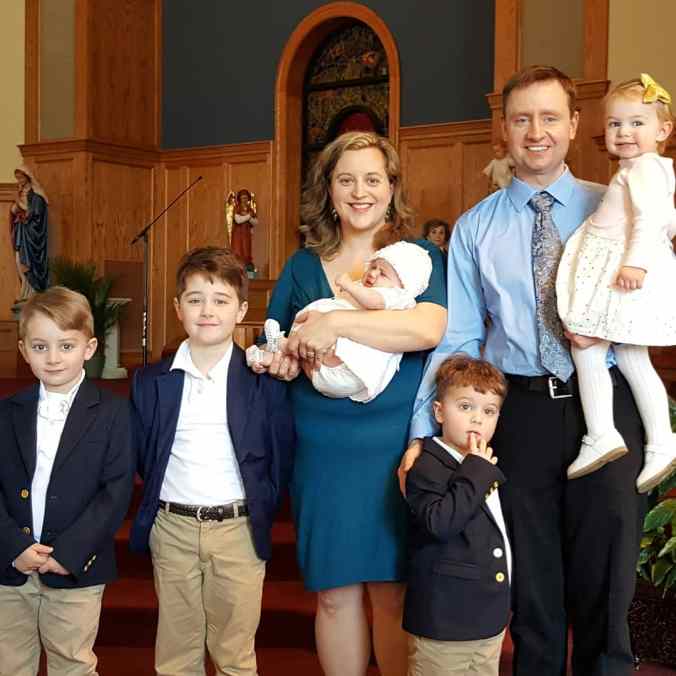 I think I’m glad that we’ve hit the two-month mark. While part of me is a little sad that my baby’s gotten so big (I think she’s around 12 pounds now?) so fast, most of me is relieved to have gotten through the newborn haze. I always feel a little more ‘with it’ once we’ve gotten to two months. That’s when things seem a little more normal, a little more doable to me.

My recovery this time was pretty good, I guess. At least it wasn’t very painful; the most bothersome thing was just an extended period (two to three weeks?) of feeling weak and woozy. I always forget how long that can last.

I wasn’t thrilled with how the birth went, though. Like all the others, I was induced. But unlike the others, this time it took what felt to me like foreeever. With each of the other four, I delivered within 7 to 8 hours of getting my Pitocin. This time it took twice that. It also took me longer to push with Ilsa than it took with the previous two. (Thanks, nurse who suggested I up my epidural dosage.)

Maybe because of the birthing situation, but probably mostly because of whatever weird things hormones do, I’ve had my longest-ever period of the Baby Blues this time. With two of my other babies it lasted about three weeks. With the other two I didn’t have it at all. This time I’ve just been very gradually improving for months. It’s been mild, but still – I’m ready to feel like myself again.

Everyone else is doing great. The kids absolutely love her. They coo at her and say how cute she is and clamor to hold her as often as we’ll let them. (Which hasn’t been as much as anyone would have liked. It’s hard to have a baby in cold and flu season!) 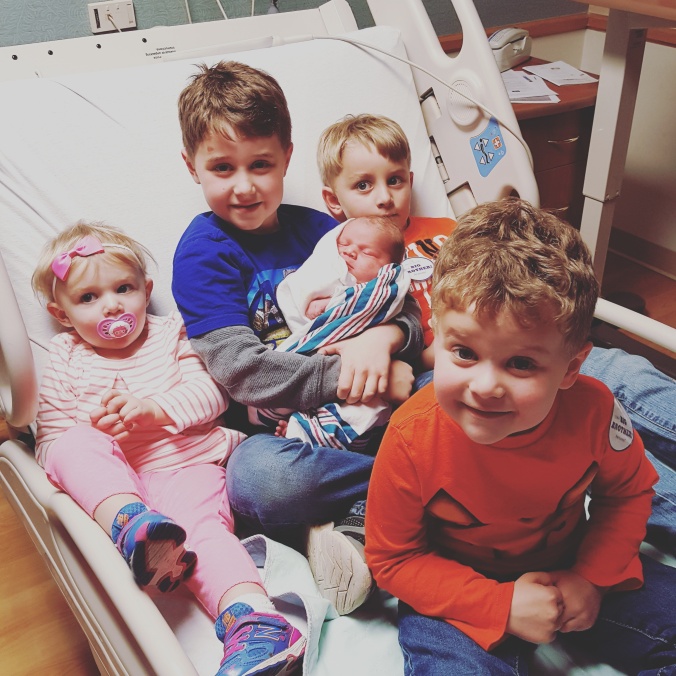 It’s hard for me to say what ‘kind’ of a baby she is. So far Ilsa is pretty easy during the day and difficult in the evening. Then she’ll sleep from midnight to three or five in the morning and I’ll nurse her in bed or in the rocker until it’s time to get up. If I were someone who loved co-sleeping this would be fine. But I’m not. I just don’t sleep well with a baby next to me; I seem to hold perfectly still for fear of hurting her, and then I wake with aches and pains from my efforts.

Oh, well! Do you want to see some more baby pictures? 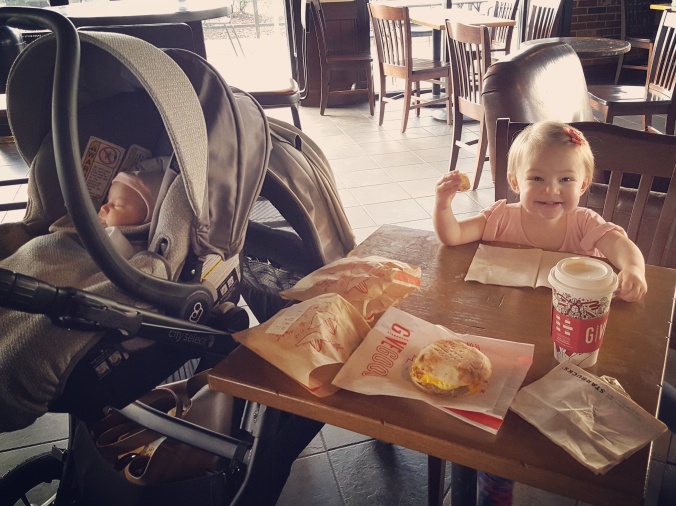 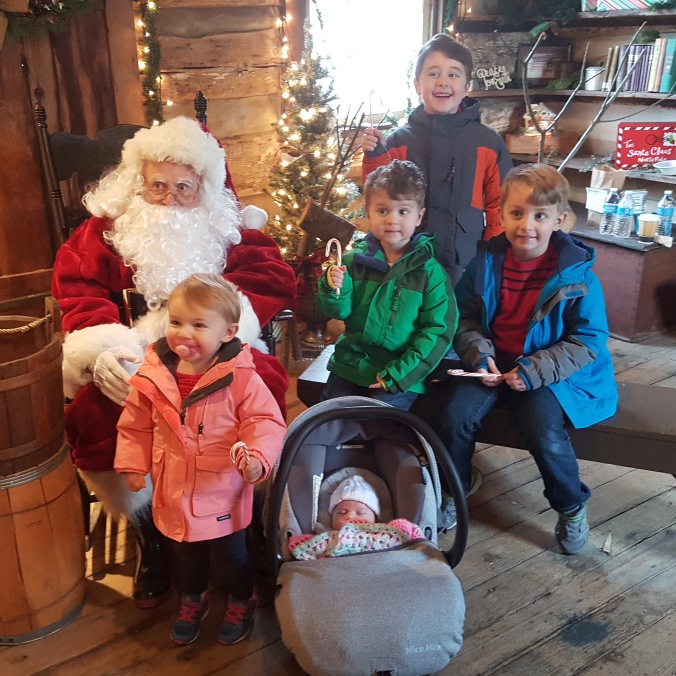 Welcome to our world, Ilsa Genevieve. We’re so glad you’re here. All the Baby Blues and aches and pains and evasive actions to protect you from your germy siblings are so totally worth it. We love you. 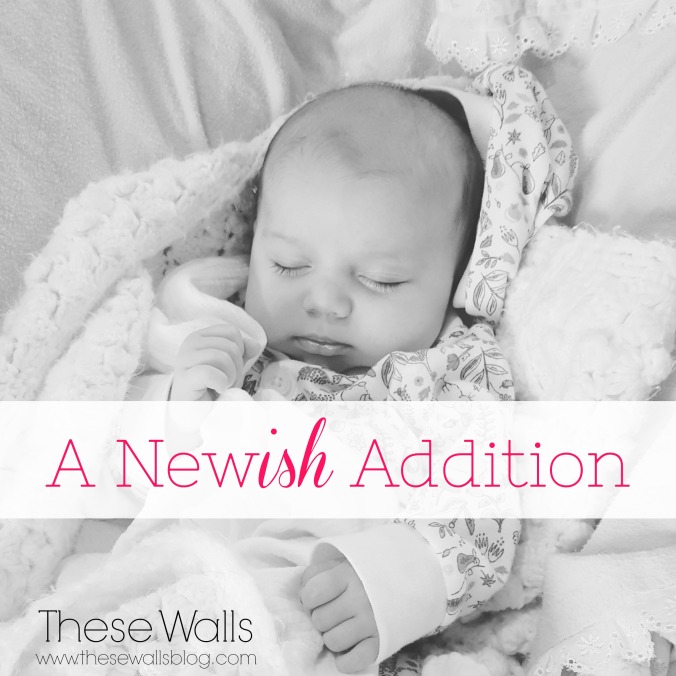