Today (er, yesterday – I’m getting this posted past midnight) the closing mass for World Youth Day 2013 was held on Copacabana Beach in Rio de Janeiro, Brazil. Have you seen the pictures? Have you seen that three million people attended the mass? Three million people in one place. That’s like the whole state of Iowa, squeezed into a 2.5 mile-long stretch of sand. It’s mind-boggling. It’s just about impossible to visualize.

Eight years ago, I was struggling to visualize what one million people looked like, and I was standing in the middle of it. Back then I was attending the closing mass of World Youth Day 2005 outside Cologne, Germany. I was out in the middle of a massive field, to which we had hiked for what seemed like hours. Maybe it was hours, I don’t know. The whole thing’s a little fuzzy to me. I just remember walking through a small town (Maybe we were bussed there? Maybe we were delivered via train?) where people lined the streets to watch us pass. Then we were trudging along a rugged path; finally we were stepping onto a ginormous field filled with hundreds of thousands of people.

We set up “camp” (the term is used very loosely – I think I might have slept under an umbrella) and spent the night on the ground, so as to be in place for mass the next morning. When we went to sleep, the place seemed crowded. By the time we awoke, it was packed. People had filtered in through the morning hours, filling in just about any space they could find. It wasn’t just WYD participants, either – lots of locals had also come. I kept hearing that there were a million people there, but all I knew was that there were people everywhere, as far as I could see. 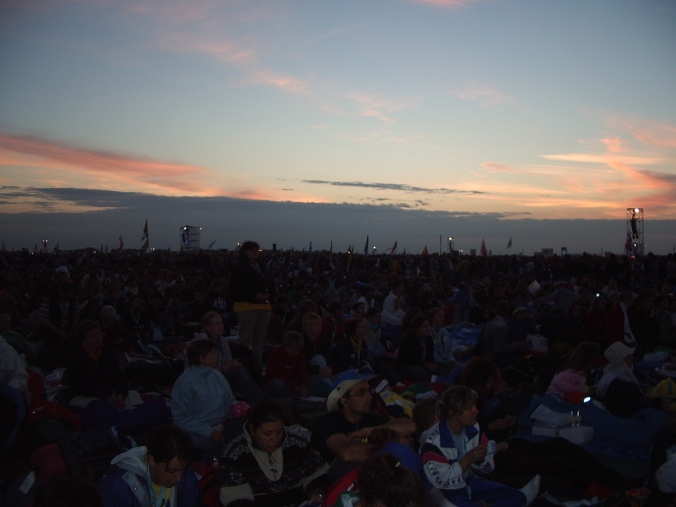 To get a sense of that amazing number, I looked up at the altar (which I could see decently well, though I was only able to see newly-elected Pope Benedict XVI through a pair of binoculars) and some jumbo screen landmarks and got a sense of where I was in relation to them. Then I looked onto the screens themselves, where they kept showing aerial footage of the crowd. We were almost directly in front of the altar, about half-way back. Soon enough it dawned on me that my “everywhere,” my “as far as I could see,” was maybe 1/5th of the entire crowd. You simply can’t see one million people when you’re in the middle of them. 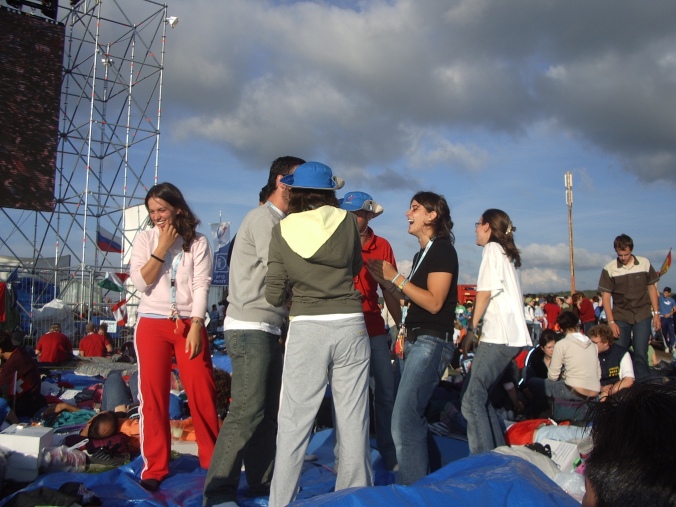 Obviously, the experience made an impression on me: this sea of young people, taking it in turns to laugh and sing and pray. Even at home, even on a regular Sunday, sometimes at mass I’m struck with the wonder of it all: that modern people, pushed and pulled by the demands of their everyday lives, would come to spend a quiet hour in the company of One whom they cannot not see. That they would sit and listen to words written thousands of years ago about people in an entirely different part of the world, words that somehow also apply to them. Here. Sitting here in their sundresses and flip-flops and polo shirts, pockets filled with muted iPhones and jangling car keys. That they would walk quietly up the aisle to eat bread and sip wine that is somehow also the very body and blood of the One for whom they came. That boggles my mind too.

So if a “regular” Sunday mass (sometimes) strikes me as so amazing, imagine how amazed I was at seeing one million people at mass. Most of them cold, wet, tired, hungry and young? Like I said, it made quite an impression.

You know what also made an impression on me? The way WYD was received by the local community in and around Cologne. I didn’t have the typical WYD experience while I was there because I wasn’t a full “participant,” technically. I was a volunteer in the U.S. bishops’ temporary office, which served as a home base and troubleshooting center for the leaders of the U.S. groups attending WYD. Sometimes those leaders stopped by with their participants; sometimes a few of the bishops dropped in. But I really enjoyed when the locals visited. I speak German (These days I just kinda sorta speak German; back then I actually spoke it), so I was usually the one who got to chat with the local visitors. And what I heard warmed my heart.

One older couple stopped by “just to see what all the young people were up to.” Most were curious and maybe a little bemused at this invasion of Catholic youth. You see, Cologne is used to crowds. They host a massive Karnival celebration every year (think: Mardi Gras), so the locals thought they had a pretty good idea of what to expect when hundreds of thousands of young people descended on their city. But to a person – whether visitors to our office, or taxi drivers, or the host couple who took me in – the locals I met were pleasantly surprised, impressed, and even touched by their experiences with WYD participants.

Western Europeans, of course, have a reputation for being very secular. Their churches are said to be empty and they seem to be, at best, ambivalent about religion. (Now, I know that’s not the rule everywhere. I spent a summer in Bavaria, where the church seemed to be very much alive.) So it was beyond refreshing for me to encounter all these Germans who were having a positive, hopeful encounter with the Church. For a moment, at least, I think they saw another way.

And you know what? Those kids did that. Those noisy, sloppy, joyous kids did it. The Holy Spirit used those kids to reach out to people who had perhaps become unaccustomed to opening their hearts and minds to God.

Now, I don’t know how great of an impact a one-week-long event can have on the entirety of anybody’s life, whether participant or witness. But I think it can plant a seed. I think there are thousands upon thousands of people who remember those few days of 2005 fondly – perhaps with joy, perhaps with peace, perhaps just with interest. I feel blessed to count myself among them.