Whew! I finally took the plunge into controversial topics yesterday with this post on immigration reform. That (posting on controversial issues) was the idea when I started this blog, but so far my posts have focused primarily on the stay-at-home mom thing. That and explaining myself. It felt good to get something out there on a Big Topic. Hopefully I won’t chicken out before writing on any more.

The only reason I was able to write such a long post yesterday is because my 20-month-old (above, haunting the laptop) took a FOUR hour nap! But don’t be too jealous. He only slept that long because he was up until 10:30 the night before. We’ve fallen into a terrible pattern of sleeping late, eating and napping late, and then going to bed way later than is decent for a household with two toddlers in it.

Which is why I keep finding the boys asleep on the sofa: 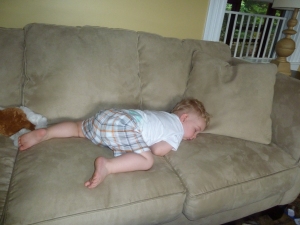 Usually they only fall asleep while eating:

Maybe we can get ourselves on a better sleep schedule this weekend. We’ll be heading to a family reunion, where my older son and I will “camp” out with my extended family in some cabins in the woods. My family (my grandmother and her nine siblings and their families) have been doing this every other year for 30 years. And all but one of the reunions has been at this same camp. I’m really looking forward to introducing my boys to the woods and the stream and the campfire ring and the trails that I enjoyed so much as a child. Not to mention all the family I love so dearly.

I’m sure my boys, though, are really going to love all the bugs. They have no fear of the little critters. They love picking up ladybugs and ants and stinkbugs from all over our house. I’ve even (I report with glee) trained them to carry the latter varieties straight to the trash can. So this morning I found my 20-month-old laying on his belly, picking up an ant, running it over to the trash can, and then returning for another. Over and over again. Who needs exterminators when you have little boys around?

I thought this short piece in yesterday’s Washington Post was really great. It’s connected to what I was trying to say in this post: Washington’s “brokenness” or inability to resolve policy differences isn’t an accident. It’s a symptom of division in the country at large.

And speaking of division and discord… My boys have recently refined their own particular methods of tormenting each other. The older one (who turns three in just a few days!) has a somewhat scatter-shot approach: he walks past his brother with a feigned innocence, randomly shoves or hits the poor little fellow, and then just keeps on going.

But the little guy is more focused: He stares down his big brother with a scowl on his face and shouts, “No, Beh Boys!” (His nickname for his brother.) And again and again… “No, Beh Boys, No!” The bigger guy Can. Not. Stand it. He howls, “No, Jude! Jude say NO to me, Mommy!” It goes on for some time, the little one steadfast and shouting and clearly in control, the big one cowering and crying.

Oh, my goodness. What in the world am I in for?

Thanks for coming ’round! Be sure to go see Jen for all the other Quick Takes!