Three years ago this month, I was put on bedrest to wait out the last few weeks of my first pregnancy. One day I was at work, surrounded by boxes and stacks of papers that I needed to go through before the baby came, and the next I was making my third “oh, never mind” trip to Labor and Delivery, at which point my doctor said, “Enough. Get thee into bed.” (Or something like that.) At any rate, the experience was something of a shock to my system. I went, overnight, from life as a professional, (officially) working woman to a stay-at-home mother and homemaker.

And it was hard. Not that it was physically or even mentally hard at first – I mean, I was mostly laying low, swollen feet up and massive belly resting uncomfortably. But it was emotionally hard. In part because my exit came sooner than I expected: I felt guilty for leaving my successor with so many loose ends and I didn’t get to have that last day at work to walk through the office and say goodbye to the people and the place and know that that’s what I was doing – saying goodbye. The greater part of it, though, was coming to terms with the fact that my life was changing in a big way. I’d spent nearly a decade as an independent, professional woman. And suddenly I was facing a vastly different way of living my life.

I’m not saying that I had doubts about what I was doing – I didn’t at all. I had always, since I was a little girl, wanted to be a stay-at-home mom. I enjoyed my work and I was very grateful to have had the experiences that came along with it, but I had always hoped to be able to choose full-time motherhood over a career someday. And here it was: that opportunity, that blessing! But it was still hard to transition to that new way of living my life. I don’t know about you, but any change is a little difficult for me to accept and a big, life-defining change (wonderful as it might be) is a lot difficult. Transitioning from being single to being engaged? Hard to wrap my mind around. Becoming a wife? Harder. Becoming a mother and spending so much time within the four walls of my house and not seeing lots of other people on a daily basis and being fully dependent on someone else’s paycheck and having a tiny person rely on me every single moment of my day? Way harder. 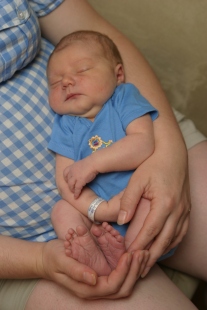 Of course, once the baby arrived, my day-to-day life (not just the idea of my life changing) was challenging in much more tangible ways. Life with a newborn is a special kind of difficult. It’s beautiful and full of wonder, but it’s also demanding and stressful and exhausting. Yes, before you know it, that short but intense period passes and you settle into to your new normal. But with that first baby, at the beginning of my “job” as mother and homemaker, I felt lost.

Which really shouldn’t have been all that surprising. I’d felt lost when I began my (other) two jobs, too. My first (well, my first grown-up, real-deal job) was straight out of college. I was working for the federal government, in a field I didn’t know, with people who spoke what sounded like an alphabet soup of a language. (Let me tell you, those Feds know how to do acronyms.) My second job was working as a lobbyist, in an environment I understood, but advocating on issues that were unfamiliar to me. Both times, I felt like I’d been thrown into a lake and told to swim – on a day so foggy I had no clue which direction I should head in, let alone any concept of what the coastline looked like or even how big the lake was.

But, of course, I figured it out. Soon enough that coastline emerged from the fog and I had a frame of reference. I began to develop an understanding of the issues with which I was tasked, and then I was able to discern the direction I needed to go in. With both jobs, I found that there was something special about the three-year mark: that point at which things fall into place and you suddenly just get it. You understand your environment, you know your role within it, and you have the tools to do the work that needs to be done.

That’s where I am right now, in my third and most important of jobs: mother/homemaker. Now, don’t hate me for saying that I suddenly get motherhood. I’m not claiming that the job is easy or that I have it all figured out. I’m just saying that it’s really nice not to feel lost anymore. There are plenty of things I mess up or I’m lazy about or that just plain ol’ throw me for a loop. But on the whole, I do get it now. My “job” makes sense to me and (on most days) I’m confident that I can do it well.

So, yes, this month I’m three years in, and I love that.