If I were to work on a list of New Year’s resolutions for myself, it would probably be pretty boring: go to bed earlier, rise earlier, get more sleep, make daily time for prayer, set aside a few half-hours per day in which to tidy up my home so I’m not feeling like a crazed, unaccomplished slob when the witching hour hits.

Schedule, schedule, schedule – I always seem to think that there’s some perfect, illusive way in which to arrange my day, and if I could only figure it out, my life would instantly become more peaceful and fulfilling.

But as I said in my last post, I’m just not up to giving resolutions much thought this year. I’m too preoccupied with the here and now to worry about the next twelve months as a whole. And I’m realistic enough to know that no New Year’s resolution stands much of a chance against the attractions and demands of a newborn.

So that first paragraph above – those vague thoughts regarding my schedule, which I’ve tried to tackle a million times – that’s as close as I’m going to get to resolutions this year. And I refuse to stress over them.

But I do believe I have a word for the year.

Some of you may be familiar with the idea of choosing a word to represent, even guide, the year ahead. (Here’s a good example in a recent post from Elizabeth Foss.) This isn’t something I do every year, but when inspiration strikes, I think it’s a worthwhile exercise.

Two years ago, the word “generous” kept coming to me – sneaking up on me, lingering in my mind. I knew that it was a concept I needed to work on, so I reluctantly acknowledged and accepted the challenge. (Honestly, I thought it would be as simple as making a few more online charitable donations and even that made me nervous.) But soon enough, a much deeper and more challenging generosity was asked of me: My husband’s stepfather died, leaving my mother-in-law in need of a new home. So we took her in. And in that one, big act – as well as countless smaller ones connected to it, my husband and I were asked to show a generosity that we’d never much contemplated before.

This year, another word has been haunting me. (So I’m probably in for it all over again.)

I feel like I’m supposed to be brave this year.

So far, the word has been rising to the surface in small, seemingly meaningless situations:

A woman begs for money outside the grocery store. I hand her some cash but hardly look at her, aware as I am of how awkward the situation is. I should make eye contact. I should smile. I should stop being a wimp long enough to wish her a happy new year. I should be brave.

Touchy political and social situations rise to the forefront of the news and… I falter. I write a few paragraphs, I ponder the words and ideas as I go about my daily tasks, but I fail to commit to them. I worry more about causing trouble than I do about speaking (my small slice of) the truth. I should be brave.

I encounter the normal hardships of family life (and indeed human life) and I rebel. I act like things somehow aren’t supposed to be hard; I rail against the difficulties until I tire of doing so, and then I just cry. Instead, I should be brave. I should face my troubles, engage them, work through them, and keep my wits about me as I go.

So that’s where I stand at the beginning of 2016. I look forward with some trepidation, feeling sure that my job this year is to be BRAVE. (And how intimidating is that?) The idea makes me nervous — but it’s also kind of exciting. What in the world could be in store for us? 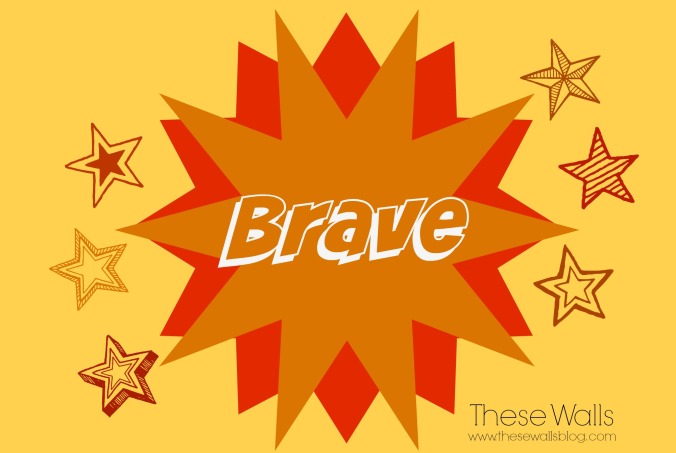