Wait, what did I say about posting every day this week? Because yesterday came and went, and as far as I know, I didn’t post a thing. (Shhh…)

For those of you visiting from 7QT, here are links to Monday’s (late) 7QT post, Tuesday’s post on a man who saved 669 children from Czechoslovakia on the eve of WWII, and Wednesday’s post on my 12-week sono and thoughts about mothering all boys.

There’s more to come – I promise.

If there’s one subject that I’ll spend hours writing on and still not get it right enough to publish, it’s racism. That was my problem yesterday, and it’s been my problem many times before. Can’t… quite… get… up… the… nerve!

After a kind of foggy/dreamy Wednesday because I was living inside my head, trying (to no avail) to get that racism post right, I took a break yesterday. The weather was absolutely gorgeous and Brennan had taken off work to tackle a project (see below), so we all spent more time outside than usual. I made a stab at weeding the jungle behind our house, the baby sat in his stroller (poor guy – I don’t trust him to roam free), the boys busied themselves with sidewalk chalk and sand, and Brennan went about his work…

… which kind of terrifies me. 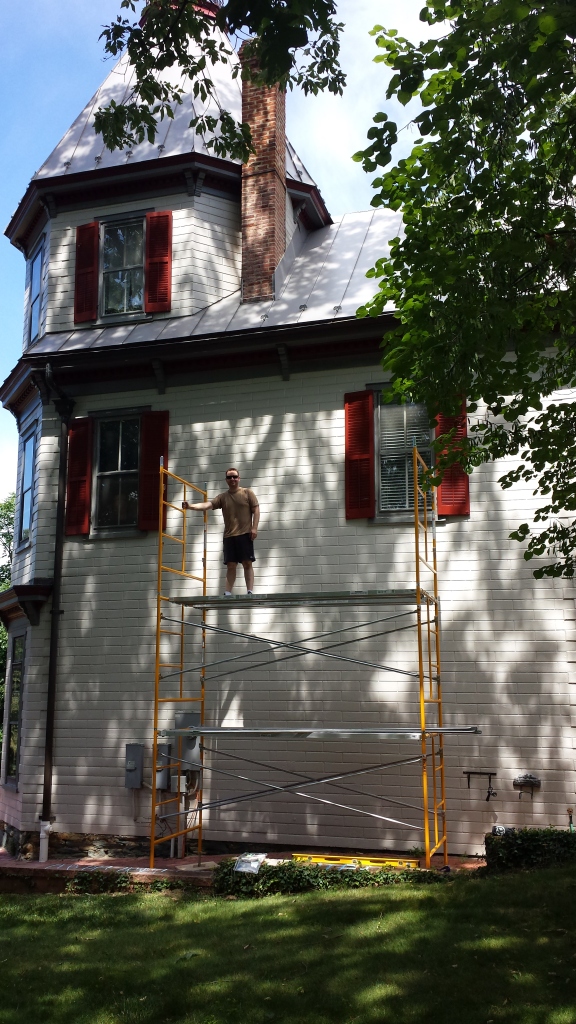 Do you see the chimney at the top of that photo? Well, there are some pieces of (wooden) siding just next to it that are rotting because there used to be a leak in the roof. We had the roof replaced a couple of years ago (THAT was a PROJECT), so the leak is no longer an issue, but the rotted siding still needs to be replaced. (Or at least that’s how I understand the situation.)

Anyway, Brennan is a worker-bee kind of a guy who would rather do just about any home-repair job himself rather than pay someone else to do it. So here we are. He bought scaffolding (which he plans to use in the future to paint the entire exterior of the house), a harness and other safety equipment (thank goodness), and replacement siding, etc.

Now he’s off to the races. Yesterday he erected the scaffolding and secured it to the house. I believe today he’ll be building some sort of a platform to reach the roof. Then, hopefully, he’ll be able to complete the actual siding work.

Please pray that he does it all safely!

As I said above, we all – including both boys – spent more time outside yesterday than usual. For one child, “more than usual” ended up being a couple of hours, maybe. For the other – my lover of the great outdoors, his Daddy’s helper and shadow – “more” meant all day. It was so sweet to see: He followed Brennan back and forth between the house and the garage, he helped me weed the garden, he drew “storms” all over the brick patio, he played in the grass next to the scaffolding while Brennan worked to build it, and he even ate his lunch on a picnic blanket with a perfect view of the thing.

I love that child.

Since I’ve got a whole “link to an article and write some commentary on it” thing going this week, I thought I ought to include at least one such piece in this 7QT. A light one, with a little personal story rather than commentary. So here’s a Wall Street Journal article on adults who never learned how to ride a bike.

Alas, I fit into this category.

In my case it wasn’t the whole “kids don’t spend much time outside anymore because of cable and videogames” thing – I spent plenty of time outside. It’s just that my outdoors time was mostly spent loading my favorite possessions into a little red wagon, trekking through the neighbor’s yard as if across the prairies, and then building forts behind his forsythia bush.

For me, it was that we lived on a pretty busy rural road, so we didn’t have a ready-made place to practice. And I needed ready-made, because I was a huge wimp about it. My brother grew up in the same house and on the same road I did, obviously, but once our dad had taught him the basics in the back yard, he took off with it. Soon enough, Eric was riding through the yards and the little streets behind our house. Later, he got into triathlons and long-distance cycling.

(Yes, he and I are very different.) When our dad taught me the basics of bicycle riding in the backyard, that’s where I stayed. To this day, I can make a bike go, but I can’t safely make it turn or stop. If I’m lucky, I’ll do a continuous loop of big, wide circles in the grass.

But really, I can only think of one time in my life when my inability to ride a bike was anything near problematic. And that would be on the campus of Stanford University in the fall of 2000. My senior year of college, I was dating a guy who had just started a master’s program at Stanford. I flew out to visit him a couple of times (which felt like a BIG DEAL) and found, to my dismay, that riding bikes around campus was the thing. My boyfriend had borrowed a bike for me to use, and he clearly intended for us to spend much of the weekend seeing the sights on two wheels.

He was flummoxed and incredulous and determined that we were going to ride bikes anyway. (Clue #47 that he was not the right guy for me.) So I got on that bike and white-knuckled it across campus. I honestly don’t know how I made it. I know I was terrified, especially whenever we were near roads. I also know I was shaky and wobbly and just about at the end of my rope. On the return from our lunch (or whatever kind of outing it was), my luck ran out: I first ran into a (parked) car, throwing the bike out of the way to avoid damaging the vehicle. A few minutes later, I ran full-on into a bush. At that point, I snapped.

“I do not know how to ride a bike. I will not do something I am uncomfortable with.” (Death stare in his direction. Clue #48.)

Fun fact: Just before I was due to fly out to Stanford the second time, the boyfriend dumped me. As I had already purchased the ticket (and had very little money at the time), I informed him that I would still be coming. One night I prepared he and his roommates a delicious home-made dinner that caused the roommates to gush that I was a princess and that the (ex)boyfriend should marry me at once. 😉 The other night, I made him take me out to an expensive dinner. It was overlooking the Pacific and incredibly elegant and I ordered whatever. I. wanted.

Back to my life in the here and now. (And can I just tell you, when I think back on that boyfriend, how very, very grateful I am to have ended up with Brennan?)

I forgot to include sono pictures in Wednesday’s post! So here’s our little cutie #4: 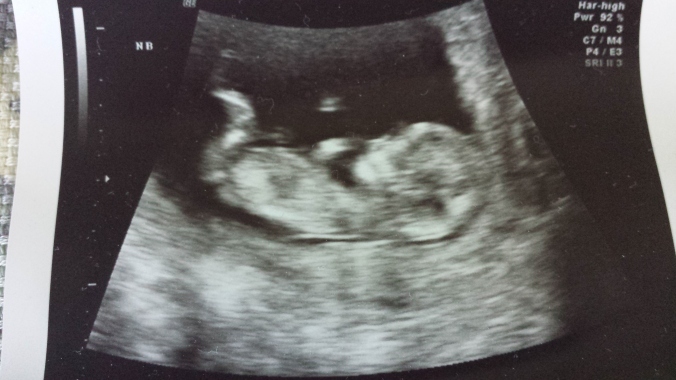 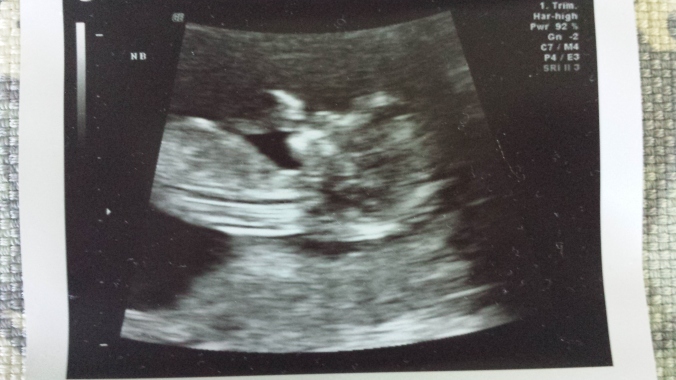 Have a very happy weekend, everyone! Don’t forget to stop over to Kelly’s to check out all the rest of the Quick Takes!