This morning I was supposed to find my son an orange shirt to wear to school for “Unity Day,” the point of which has something to do with not-bullying.

I’ll admit to rolling my eyes when I read the email.

First of all, because I didn’t think the kid had an orange shirt and I wasn’t sure how well he’d fit into one of his younger brothers.’ (And I thought it was ironic that my son could end up feeling all left out at school because he didn’t have the right shirt for not-bullying day.)

Secondly, (and more importantly) because I find this passive “let’s all talk about how bad bullying is” thing to be kind of maddening. I’m pretty new to parenting a school-aged child, so I’m not super familiar with anti-bullying initiatives. But in the past five to ten years of Bullying Awareness, most of the efforts I’ve heard of have seemed… vague? Unproductive? Misdirected?

(This morning when I told my son about the wearing-orange thing he wanted to know what wearing orange had to do with bullying. “I don’t know,” I told him. “It’s silly. You don’t have to do it if you don’t want to.”)

Quite possibly there are some good, solid lessons hidden amidst all those policies and procedures, but I wish this whole movement didn’t come across as so gutless.

Because honestly, I think the best way to combat bullying is to teach our kids to have some guts.

I know I want my kids to. I’m doing my darnedest to teach my boys to stand up for what’s right and to work against what’s wrong.

As parents, one of our most fundamental responsibilities is to teach our children how to behave in relation to other people. Hopefully we try to teach our kids to be loving and kind and personable and welcoming. But we also need to teach them to be strong and protective and just.

You need to stand up for what’s right. Stick up for yourself. Stick up for anybody you see being bullied. Especially stick up for those who are younger or weaker than you.

You go right up to that bully and you tell him or her to STOP. Sometimes that will be enough (bullies aren’t used to being confronted), but if it’s not enough and if the situation really needs to be dealt with, tell a grown-up.

(Also: Don’t you be mean either. You are not a mean kid; don’t act like one.) 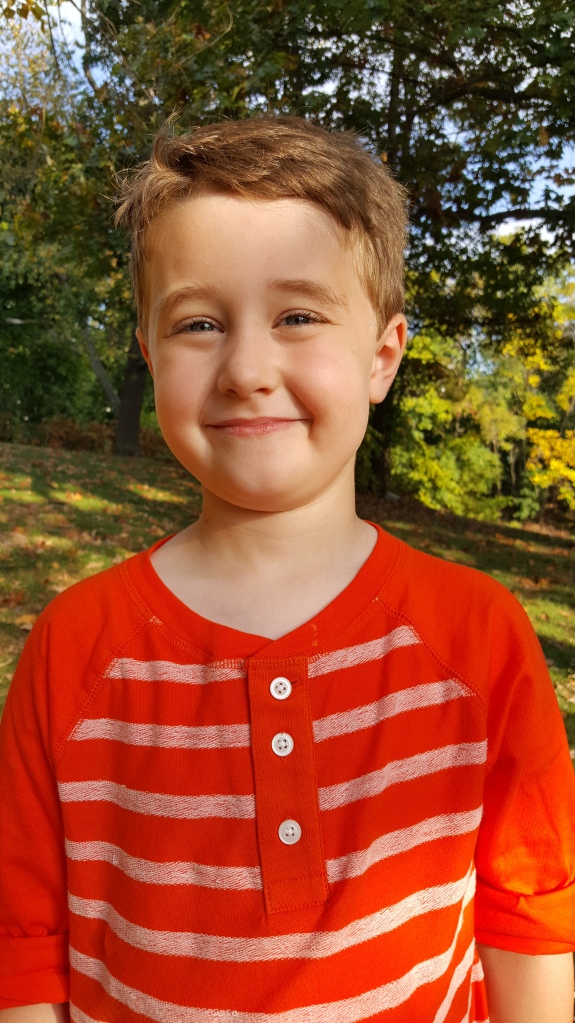 Turns out he had an orange shirt after all.

Some might say that children shouldn’t have to deal with bullying to begin with, that we adults should be able to devise ways to prevent it. But there are lots of things children shouldn’t have to deal with – illness, loss, violence, etc. They happen anyway. We don’t do children any favors when we prepare them for a perfect, protective world. We’re better off preparing them for the one we’ve got.

Childhood is a training ground for adulthood. Here is where we plant the seeds for the habits and values we want to see in our adult children.

And anyway, even putting aside the concept of a “training ground,” I want my kids to tackle these situations because it’s the right thing to do. I would rather my child face negative consequences for doing what’s right than to slide by consequence-free because he kept silent in the face of injustice.

I know it can sound like a tall order. Some might say that children aren’t up to the task. But I know it’s possible because I did it. I did it as a kid, as a teenager, and I still do it when those unfortunate opportunities arise.

Let’s give our kids a shot. Let’s see what they can do. Let’s teach them to be brave, to stick up for others, to stand up to bullies, to be the kind of people who stand up for the right and against the wrong.

This post is the fourteenth in a series called Everyday Bravery: A Write 31 Days Challenge. Every day this month I’m publishing a blog post on Everyday bravery – not the heroic kind, not the kind that involves running into a burning building or overcoming some incredible hardship. Rather, the kinds of bravery that you and I can undertake in our real, regular lives. To see the full list of posts in the series, please check out its introduction.

2 thoughts on “I Want My Kid to Be the One Who Sticks Up For Your Kid: Empowering Children to Stand Up to Bullies”