Grace of the always-worth-visiting Camp Patton is trying a new link-up today called “Sunday Best.” The idea is to blog on your “Sunday Best” clothes and/or your children’s “Sunday Best” (or far from best) behavior at church. I’m in!

(By the way, to any mom friends who haven’t yet checked out Camp Patton – do! Go! Right now! Grace’s tales of life with her three under three are like a visit from a good friend who knows JUST what you’re going through. And who arrives at your house bearing your favorite cocktail.)

Anyway, I’m not going to post a photo of the outfit I wore to mass today. Because (1) I have a head of frizz in this humid summer weather, (2) I’m sunburned and exhausted-looking after the wedding we attended yesterday, and (3) I’m one of those self-conscious moms who (almost) never takes pictures of herself. Yep, that’s me. I admit it.

I will, however, get up the courage to (cringe) post a photo of the boys and me from yesterday’s wedding, because it’s such a good representation of the mass behavior I can typically expect from them: 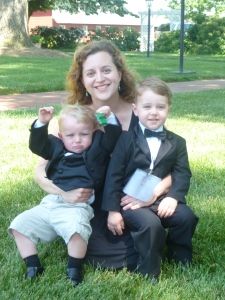 The almost-three-year-old is usually very well-behaved in mass. (At home? That can be a very different story. But in mass, thankfully, I can normally count on an ‘A’ performance.) The 20-month-old usually does pretty well through the homily, but around the consecration (perfectly timed, I know) he turns into something like the above and the hubby rushes him out.

Today everybody was tired from the wedding, so you can imagine how we did. Big brother kept up a constant stream of low-level noise – lots of whispering and climbing and sound effects and jiggling like a plastic bag filled with Jello – and he responded Not One Little Bit to my corrections. He gets a ‘C’ – saved only by virtue of keeping it all to “low-level.” Little brother pulled off a pretty typical performance, so I guess he gets a ‘C’ too. Even though he successfully brought out the giggles in the people sitting behind us by repeatedly dripping his milk onto the pew and then wiping it up with a napkin, saying “messsh, messsh.”

On a much nicer note, I have to mention that our parish held a Eucharistic procession through town directly after mass, in honor of Corpus Christi. It was the first such thing I’ve participated in. Years ago when I was studying in Germany, the little Bavarian town I was living in hosted a HUGE Corpus Christi procession, complete with hundreds of people wearing lederhosen and dirndls. And I MISSED it! I had signed up for a day trip to Neuschwanstein, not realizing that (1) it was scheduled for Corpus Christi and (2) that meant that the town would be overtaken by processing Catholics. A dear friend photographed it for me because she knew I’d love it, but missing the procession remains my greatest regret of what was otherwise a fantastic summer. Our participation in this morning’s (1000x much) smaller procession lifted my spirits and went a tiny way toward removing my regret at missing the Prien am Chiemsee version.

To end, let me just share a picture of my dapper little guy as ring bearer yesterday. (Congratulations, Tom and Aunt Grace!) The little sign he’s wearing (which you can see better in the first picture) reads “ring security.” 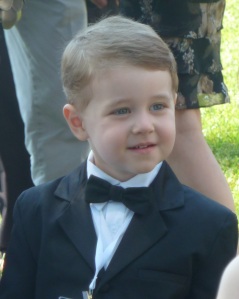 And here’s one of the littlest guy. We borrowed a friend’s toddler tuxedo so he could be just like his big brother, but, um… something got lost in the shuffle. Good thing he’s cute enough to pull off any look!

So head on over to Grace and check out the rest!