I’ve been quiet here, maybe for too long. My mind has been full-to-brimming of thoughts about George Floyd’s death and its aftermath, but they have all seemed insufficient.

This will be insufficient too.

Over the past week, I’ve been thinking a lot about our reactions to such events. Or at least my reactions and those of my fellows. (By which I mean white, conservative-leaning Americans.)

I think we white conservatives have gotten into the habit of thinking we have to hold on to something in these moments. We feel like we have to grasp at something we can be right about. We focus on the riots because they’re an opportunity for us to make a point. We focus on the good cops because they’re an opportunity for us to diminish the importance of the bad ones. We feel compelled to salvage our collective reputation.

In previous iterations of this police killing/riot ensuing phenomenon (how terrible that it should be a phenomenon), I fell into this pattern myself. I focused on the riots. Not because I didn’t think the killings were awful, but because some sort of face-saving instinct kicked in. I didn’t want to be grouped with the bad guy. And it was easier for me not to think of myself as being on the side of the bad guy when I focused my attention on the riots.

This time, by the grace of God or the honing of my conscience or some other happy development, I have been freed of that instinct. I have not felt compelled to diminish the horror of a killing by comparing it to a separate, if related, tragedy.

I think more of my fellows should try to do the same.

When you think of it, there’s not much point to us focusing on the riots. It’s not like our Facebook posts are going to stop them. We can’t tweet them away. Unless we ourselves happen to be police officers or elected officials or community leaders in the affected areas (or unless we happen to be friends with rioters), nothing we say on the subject is going to matter. It’s not constructive. It doesn’t build up or change a thing.

We should keep the focus on Mr. Floyd’s death not only because it’s the decent thing to do, but because it’s where we can be constructive. The racism that contributed to Mr. Floyd’s death (and Mr. Arbery’s and Ms. Taylor’s and so many others’ deaths) doesn’t belong solely to one person. It belongs to a society, and we’re part of and responsible for that society. We have a role in changing it.

That’s a big task and I won’t be so naïve or presumptive as to imply that you or I can do the bulk of the work required. But we can surely do some of it.

I can begin with myself. I can mourn. I can feel the pain of the situation. I can think on the family and friends of Mr. Floyd, what they lost and what he will miss. I can learn. I can pay attention to the voices of black Americans who speak out against racism. I can read essays and books and watch documentaries about the history of racism in this country and the experience of Americans facing racism today. I can seek context. I can examine my conscience, sitting honestly with myself to discern my motivations, my biases, my contributions to racism in our society, my sins. I can pray. I can meditate on all the pain and sin and ask the Lord for healing. I can make mental adjustments so that the next time I’m faced with an awful example of racism, I can deny that face-saving instinct and instead react in a holy, loving way.

I can continue with my nearest family, friends, and neighbors. I can speak up when I witness comments and actions born of racism. (And let’s not fool ourselves that we never witness such things. I’m sure we could all make lists of them.) I can talk to my kids about racism and help them to understand their role it combatting it. I can be purposeful in setting a good example for them in my actions and words. I can remain committed to fairness, and stalwart against racism, in my personal conversations and social media interactions. I can, prayerfully and purposefully, write posts here.

I can next (and I’ll admit that I haven’t yet) move on to actions directed at my broader community and its leadership. I can write letters, I can make phone calls, I could protest. I could, I’m sure, do so much more than I can currently imagine.

But that’s all got to start somewhere. And for me (and I think for you) it should start with remembering and mourning and focusing on the human being at the heart of these weeks’ events – a father, a son, a brother, a beloved child of God – a black man named George Floyd. 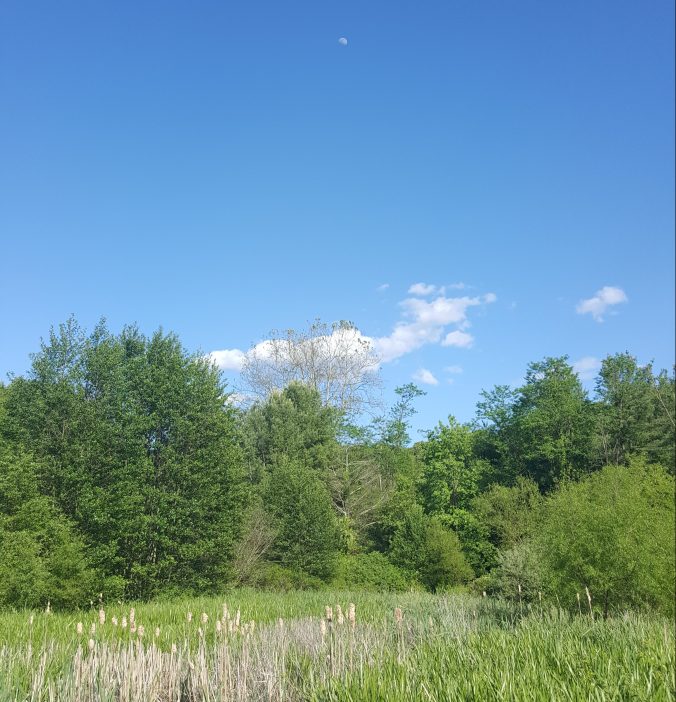 P.S. That photo there? I didn’t know which to use. No photo I’ve taken can convey the heaviness of these past twelve days. But this one, taken on a walk this past weekend, represents to me the inner struggle against racism. I prayed on that walk. I mourned. My mind struggled with all that has happened and will happen. And that’s as good as I’ve got right now.