In thinking over the past two weeks, all these images flash to my mind – moments that resemble something normal, but aren’t quite. They’re off. They’re distorted. They’re like glancing at some mildly dystopian version of my life.

I dress up my daughter to be flower girl in a friend’s wedding, but instead of strapping her into the car for the ride to the church, I take pictures of her in our backyard. I post them on social media, congratulating the bride in my caption.

I change my daughter back out of the dress before she can get it dirty. She wears it for maybe thirty minutes.

I drive my son to the doctor’s office for his fourth case of Strep in two months. We arrive, I pull into a special parking space, and I call the office. A few minutes later a masked, protective-gown-wearing doctor comes out to us. He opens the back door of my car, tests my son for Strep, and walks back into the building.

This is our second pandemic visit for Strep. The first time, a week into our isolation, that doctor looked scared. This time, six weeks into our isolation, this doctor seems lonely. He comes out to report the test results and stands there for a while, talking. He acts like he doesn’t want us to leave.

I go to the grocery store for the first time in five weeks. I’m worried about how different it will be inside, so I sit in the car for a while. I finally work up the courage to go in by repeatedly saying “You can do this!” out loud, to myself, alone in my car. I don’t even feel ridiculous.

Our dryer breaks and I’m not even that annoyed about it. My kids are pretty much just wearing pajamas all day anyway. It’s not the worst timing to only be able to wash as many loads as you can dry on a couple of wobbly racks. 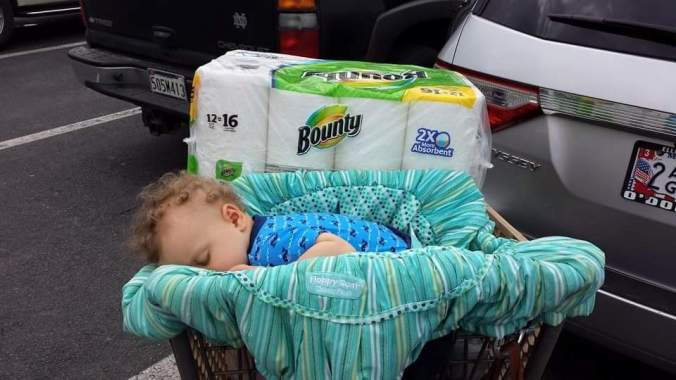 A few days later, my husband walks in from the store with an identical package. He says he can’t believe he got so lucky.

My parents stop by to drop off some things for us. They are careful; we are careful. We give air hugs and blow kisses. We remind the kids (over and over) to give Grandma and Grandpa plenty of space. They handle it well, except for the moment when the six-year-old accidentally touches Grandpa’s shirt. The adults tense up and the boy melts down. We’ve told the kids not to touch Grandma and Grandpa so as to protect them, in case we have the coronavirus. He wants to protect Grandpa. He’s distraught to think of his mistake.

A few minutes later, we say our goodbyes and watch them pull out of our driveway. I hate that I can’t hug my parents. I hate that my son was upset by something so simple as touching his grandpa’s shirt.

I’m finding my emotional capacity to be very thin these days. It takes so little to throw me off. A week ago, I was concerned that a dear friend might have Covid19 and a cloud came over me. Everything was grayer, darker, more scary and worrisome. News reports took on more weight; social media interactions became more strained.

But then she tested negative for the virus and the world brightened.

Other, smaller anxieties weigh on me too, almost unacknowledged. Then they’re relieved and suddenly I realize they’ve colored my whole day.

In the past two weeks I’ve had a few really hard days and a couple of good ones. Last Thursday was a good day. It was cool, dark, and rainy, which I sometimes find to be the weather that heals me best. I like the quiet and calm.

Schoolwork went well that day. Two children had Google class meetings, three napped, and three built forts in the family room. Dinner was warm and fattening and satisfying. I served it to the kids picnic-style, in front of a movie. I made a blackberry tart for dessert.

In the Kindergarten Google meeting, one boy showed off his new kitten. One girl hugged her stuffed horse. Another announced that, “My tadpoles are growing lots of legs!” A week earlier, my Kindergartener had attended his Google meeting as Batman. 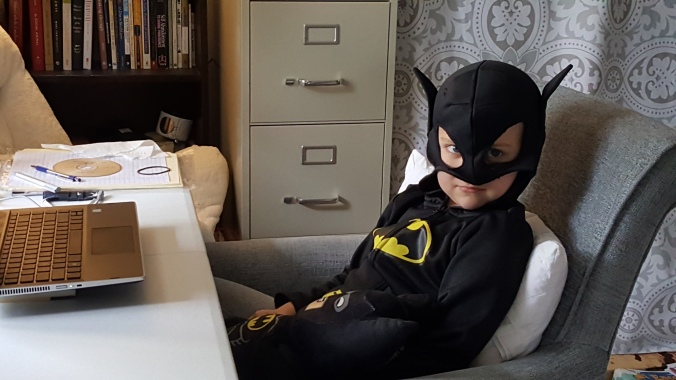 Outside these walls, the world sure seems scary. Not just because of the coronavirus: because of the economy and the unrest its decline seems to be generating. Because of division, deepening every day. Because of others’ fears, driving them to blame and cast aspersions and seek solace in storylines that confirm their beliefs. Because of my own fears, my own tendency to blame and cast aspersions (in my mind, if not out loud), my own drive to seek solace in my preferred storylines.

Inside these walls, life can be overwhelming. It can be loud and busy and messy and just too much for me some days. But it is also so, so good. These kids are creative and resilient and all-around amazing. I am enjoying having them all around, all the time, more than I could have predicted. I am learning to better love my home. I am paying attention to how my husband loves us – working his day job, doing the shopping, building the kids a playset.

As much as I mourn what’s been visited on this world of ours, I am so grateful for the small, plain gifts this time of isolation has given us. They are consolations for my mild dystopia.

That is an “air hug.” Social-distancing norms were respected.