I shouldn’t be up right now.

I should still be sleeping, soaking up those last few minutes of sustenance before what is sure to be a busy day. I should be trying to hit the six-hour mark of sleep after a late night of birthday party preparations.

Instead, our (almost four-year-old) birthday boy appeared at the side of our bed. He’d had a nightmare. Up he went to be nestled in between us, sniffling and wiggling and keeping me awake.

Or my mind did that. Too much on the to-do list today: bake a cake, fill goody bags, make some chili, clean up the remaining messes, vacuum, build a dinosaur. 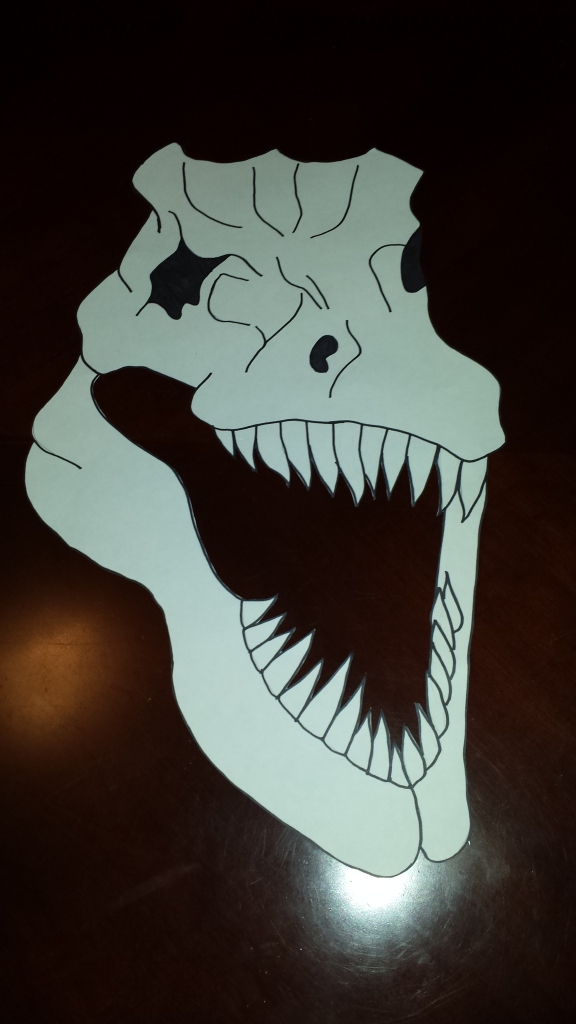 Yes, I drew this free-hand. Yes, the Internet helped.

(What? Isn’t that a standard part of any worthy to-do list?)

I’ve been running a little ragged this week – or rather, my mind has. I’ve mostly been home, but I’ve been absorbed in party prep, the Pope’s visit to the U.S., my region’s effort to celebrate and reflect on it, and other mentally-draining chatter in the blogging world. It’s really been pretty exhausting.

So I should be sleeping right now.

Instead I sit here at my laptop, a bowl of cereal before me, tapping out a few words. I want to say hello and welcome to the new readers I picked up this week. I want to tell my existing readers that I’m here and alive and very much missing writing to you. And I want to say to my mom that no, I didn’t get very much sleep last night, but I swear it’s not my fault.

So I’ll take the opportunity to point you to the fruits of my labor this week – a compilation of writings on Pope Francis’ U.S. visit to the Mid-Atlantic. Members of my regional blogging group have attended or are attending nearly every one of his public events during his visit, and over a dozen of us are writing on it, whether we’ve been able to see Pope Francis in-person or not. We’ve a load of great post so far (22 posts from eleven bloggers), and I’d like to take a moment to highlight a few of them. 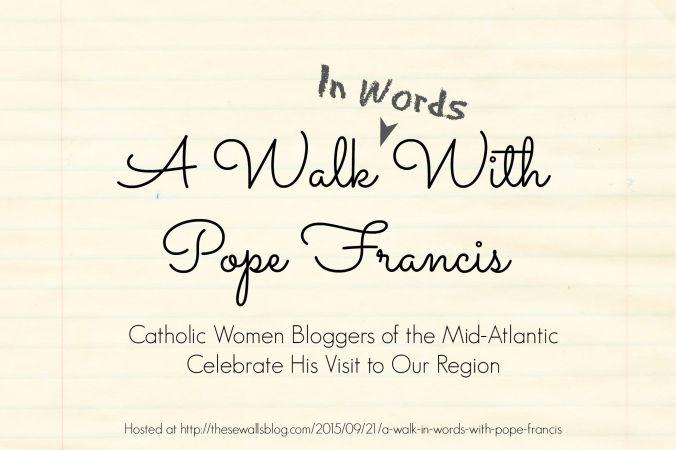 “I almost stopped my 8 year old kid from buying a souvenir Vatican flag because we had already brought a large Vatican flag from home to wave during the parade. As the Mom of many children, my default answer to any child’s impromptu spending request is usually “Let’s not buy it now.” Somehow outside the security gate of the Papal Parade, I hesitated before saying no. My hesitation was enough time for my 8 year old daughter to offer to spend her own allowance money to buy a flag. Then my husband to suggested adding another $5 from his wallet so that her younger siblings could share in the joy. If I had a metaphor for that impact of the Papal Parade, it’s that we came to the Parade with a one large family flag to wave for the Pope and we left with 5 of my children waving individual flags inside their heart for our Pope.”

“I had the opportunity to attend the Pope’s Mass on Sept. 23 in Washington, D.C., with 25,000 of my closest friends. If you were there too, I’m so very happy for you! If you weren’t, I wish you could have been, and I wish we could have crowded together against the barricade as we waited for the Popemobile to pass. For now, I thought I’d reflect on how the experience has made me think about the beauty and richness of our faith.”

“I was lucky enough to see Pope Francis twice this week. On Tuesday, I was part of the relatively small delegation that greeted his first steps in the US at Andrews Air Force Base. On Thursday, I stood shoulder to shoulder with thousands, watching him address Congress and bowing our heads as he blessed the crowd – especially the children. On this week’s Catholic Stuff podcast, cohost Fr. Michael O’Laughlin said: “Expect good things… Whenever the Pope comes, amazing things result.” I’m not expecting Congress to heed the warnings and instructions the Pope gave them. I don’t expect them to even realize how excoriating his remarks are to the priorities both parties have set for our nation . . . But already this week, I have witnessed people side by side, joyful in their faith, renewed in mercy and vigor. I have seen Facebook posts honoring him . . . from people who haven’t considered themselves part of the Church for years.”

“I wasn’t sure I had much to say about the World Meeting of Families . . . Nothing helpful to others.  Nothing that would be anything but navel-gazing.  Seriously, have you seen my navel?  No?  Then give the good Lord a nice, big “Thank You.” Then this morning, someone on Facebook asked a friend, “What’s so great about Wawa?” Hold the popephone. I may live on the border of Sheetz country these days, but I spent the bulk of my first thirty years under the warm glow of that golden rectangle emblazoned with the sleek silhouette of a Canada goose. You mean to tell me there are people who don’t know what’s so great about Wawa?  That is when I realized that I have something to say about next week’s events, something important, even something unique.  I may have left Philly and its suburbs, but Philly and its suburbs certainly never left me.  I, dear reader, have been called.  I have a mission. I have, my friends, found my WMOF blogging voice.  And thus I bring you… Seven Things You Need to Know About Popeadelphia: Your incredibly unofficial guide to the 2015 World Meeting of Families”

His hands were full, too-
busy breaking bread (somehow stretched to plenty)
busy drawing in the dirt
touching ears, heads, foreheads
busy not casting stones
grasping a hand and pulling it back to life
flipping over tables when necessary
washing reluctant feet.

I examine my hands and wish they were more like His-
less afraid to touch a stranger
more willing to reach across a fence or a language barrier
less concerned with my own comfort.

They’re full, yes, but they’re lacking.
I could always hold a little more.”

I hope you’ll stop over there to check out all the contributions. How lucky we are to have such talent in our region!

And on my way out, one more sneak peek of my little guy’s “Night at the Museum” birthday party later today: